Sumitomo Chemical sells methionine in more than 70 countries around the world. In Asia, the Company has already been providing animal feed analysis services through its Malaysian subsidiary. Given that the growth of a methionine demand in recent years is conspicuous in Central and South American countries, Sumitomo Chemical intends to fortify its customer technical support from the Research Center in Brazil, aiming to accelerate sales expansion more broadly in the region.

Methionine is an essential amino acid and cannot be synthesized within an animal body. Poultry feed, which is mainly made up of corn, often does not contain a sufficient quantity of methionine. As a result, methionine is widely used as a feed additive mainly in a poultry diet to increase productivity of chicken meat and eggs. When feed millers add methionine to an animal feed, they determine an appropriate quantity of methionine which is to be added, according to proportions of nutritional ingredients contained in the feed. This requires analyzing individual ingredients of the feed beforehand.

Looking ahead, a food demand is likely to increase as the world population continues to grow. Accordingly, the methionine market is likewise expected to keep expanding significantly in the future. In light of this long-term outlook, Sumitomo Chemical is currently working to expand a methionine manufacturing capability at its Ehime Works in Japan by 100,000 tons per annum, and the new production line is due to be operational in the third quarter of FY2018. Sumitomo Chemical will continue to expand its methionine business worldwide by further solidifying its global technical support stronghold through, among other things, rendering the animal feed analysis services not just in Central and South America, but elsewhere in the world. 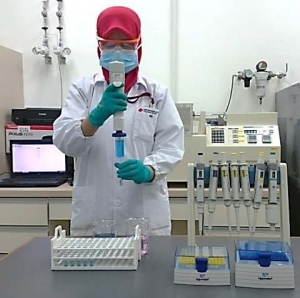 Feed analysis at the research base in Malaysia

(a wholly-owned subsidiary of Sumitomo Chemical)